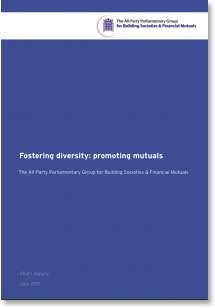 How can the Government best develop a policy strategy to implement the Coalition’s commitment to promote mutuals?

The Group accepts that the Coalition Government has been in power for just over a year and so there are limitations to how easily one can gauge their success in promoting mutuality over such a limited period of time. However, from the evidence given to the Inquiry, it is clear that the Government has not yet developed a clear strategy to promote mutuals.

The Inquiry found that the Government appears to have concentrated its policy efforts on encouraging the development of new mutuals to provide public services rather than to support the existing financial mutual sector.

Members heard that building societies had benefited over the last twelve months from a positive working relationship with HM Treasury and FSA officials, which it is hoped will yield positive results on the search for new capital instruments.

At the same time, mutual insurers and friendly societies have reported that they face serious threats to their future as a result of the FSA’s attitude to their sector, and HM Treasury’s apparent unwillingness to engage with them.

Evidence from both the FSA and HM Treasury witnesses has done nothing to contradict the impression that insufficient support is being provided to this crucial part of the mutual sector.

The All-Party Group takes note of the Government’s initiatives so far, but is not convinced that the Government has so far been able to articulate a clear vision for promoting mutuals.

This Group has therefore concluded that:

• HM Treasury appears to have taken a reactive stance to the mutual sector – beginning to deal with important issues such as building society capital, but little else of substance.

• It is imperative that the Coalition urgently adopts a comprehensive policy strategy to implement its Coalition Agreement commitment to promote mutuals.

• HM Treasury should act as a strong advocate for mutual businesses, in particular in its dealings with the Financial Services Authority and subsequent new regulatory authorities.

• HM Treasury should pro-actively promote the interests of financial mutuals within Government, and ensure that balance is given to understanding and promoting mutuals across all Government departments