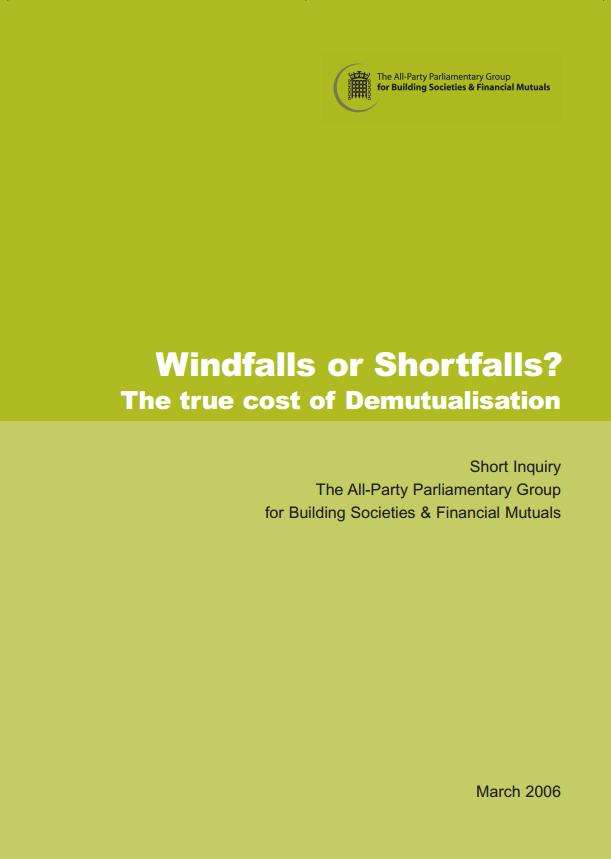 An All-Party Parliamentary Group examining the true cost of demutualisation among life companies and building societies has recommended that legislation is introduced requiring an independent check on “windfalls” to ensure members’ interests are being protected.

The report, “Windfalls or Shortfalls? The true cost of demutualisation”, is based on the group’s short Inquiry, held in November. It comes shortly before Standard Life publishes the proposed pay-out to members in its proposed demutualisation this year. The report was launched today (7 March) in Parliament.

The APPG report concluded that too many people in previous demutualisations have not been clear on the benefits, or otherwise, of the proposals from their institutions and have not had sufficient evidence to make an informed decision. Often the only material they will have received comes from boards who are campaigning for a ‘yes’ vote.

The inquiry’s findings include:

“Our report is a timely and authoritative examination of this important area. It is essential that consumers have as much information as possible before making decisions crucial to their financial well-being. We have taken soundings from all sides of the financial services sector and our conclusions are based on clear analysis of the evidence. I urge people to read the report.”

Mutuo provides secretariat to the APPG for Building Societies and Financial Mutuals.