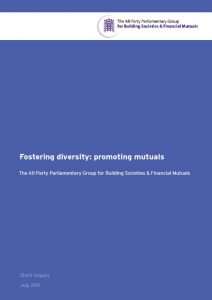 An All-Party Parliamentary Group has called on the Government to urgently set out a plan for how it will foster diversity in financial services, as promised in the Coalition Agreement. Published today, the report, ‘Fostering diversity: promoting mutuals,’ reflects the findings of an Inquiry conducted by the All-Party Group over the past six months. The Report considers how Government and Regulators have acted in the light of the Coalition Agreement pledge.

The report concluded that the Government has so far been unable to articulate a clear vision for promoting mutuals. Key findings of the Inquiry include:

Government needs to urgently adopt a comprehensive policy strategy to implement its Coalition Agreement commitment to promote these mutuals.

The priorities of the Financial Services Authority are not aligned with this Government objective to promote mutuals.

Upcoming legislation to establish the new regulatory authorities must specifically commit them to promote mutuals and foster diversity.

“We applaud the Government’s enthusiasm for creating new mutuals in the public sector, but similar attention should also be focused on those mutuals that have served consumers well for generations. During the financial crisis, we saw that mutuals fared better than their plc counterparts, showing the importance of a plurality of corporate form. A year into the new Government, we now need to see a clear strategy that helps avoid another financial crash. Mutuals will play their part in helping to develop this, but it is essential that the Government takes notice of our Group’s recommendations to deliver on this important Coalition commitment.”