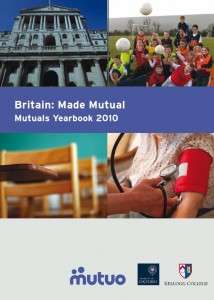 The Mutuals Yearbook 2010 published today confirms that the mutual sector is growing in strength, even during challenging economic times.

In a year which saw a crisis of ownership in a range of areas from financial services, to football, to foreign takeovers, the mutual model continues to provide a successful alternative. The report shows that mutuals are being established in new areas, and that the gross annual turnover of UK mutuals in 2010 exceeded £100 billion with the number of people employed in the sector topping one million, both for the first time.

The report – published for the 2010 Mutuals’ Forum – is welcome news for the sector with financial mutuals holding their market share in a difficult environment. At the same time, co-operatives witnessed growth both through acquisition and improved business performance. Employee owned organisations gained new credibility fuelled by increased political support. Community mutuals have increased their standing and many small societies have demonstrated their contribution to the Big Society. Public service mutuals have offered themselves up as a new type of public ownership providing a real opportunity for improving the way organisations such as the Post Office are run and operated.

Peter Hunt, Mutuo Chief Executive, said: “This is an exciting time for the sector. With more members, more employees and a higher turnover than ever before the state of the mutual sector is strong. Mutuals show that they are successful and relevant forms of business. Mutuo will work to build on the great progress that has been made in 2010.”