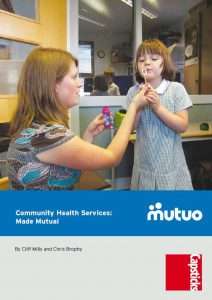 NHS community services are undergoing a seachange. These fundamental services which rarely attract the headlines – including health visiting, midwives, rehabilitation, community and specialist nursing, therapies such as speech and language, physiotherapy and podiatry – account for about 10% of NHS expenditure.

As part of the Coalition Government’s plans to create the “largest social enterprise sector in the world”, a significant number of community health service providers are being separated out from Primary Care Trusts and established as independent social enterprises.

Four of these new providers, which are featured in this publication, have been set up as member-based organisations, with democratic governance, and a professional board of executive and non-executive directors. As independent trading organisations, they need to operate in a business-efficient way and to make a profit (income exceeding expenditure) in order to survive; but they exist to provide services for the public benefit, not to trade for private benefit.

Although they are no longer state-owned and controlled, they are constitutionally and culturally committed to providing services for the public benefit, according to traditional NHS values and principles. They are led by people who are convinced that this is the way to secure the long-term future of NHS services.

These new organisations are not yet well-known or understood; but they are examples of the future of public ownership.