Skip to content Skip to main menu
Home › Advocacy › Mutual Business Detector: How to decide which public services could be mutuals 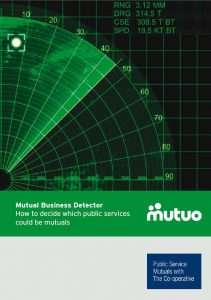 Co-operatives and mutuals were given prominence in the Coalition Agreement as a means of transforming the way public services are delivered. This reflected an existing direction of travel for Government policy; the previous Labour Government had directed and encouraged the establishment of NHS Foundation Trusts and co-operative trust schools and all three major parties had expressed enthusiasm for cooperative and mutual structures in their manifestos.

The result, viewed dispassionately, has been a great deal of confusion and comparatively little concrete change. The debate has been largely theoretical and, because each form of mutual has its own passionate advocates, it has not led to any shared understanding even on what a mutual is. In illustrating the benefits of mutuality, the Cabinet Office has pointed mainly to employee owned enterprises but the biggest examples of public service mutuals – NHS Foundation Trusts and co-operative schools – give wider ownership and offer service users a voice. Whilst the debate has been going on local authorities, faced with an imperative to reduce cost, have been achieving this by the tried and tested method of large scale redundancies; in some services, this has significantly compromised the chances of establishing a new enterprise before the idea has even been considered.

Three principles have informed the development of the Mutual Business Detector:

• If mutuals are to play a part in the delivery of public services, there is a need to make and implement decisions quickly

• Councils do not have the resources to carry out sweeping, large-scale options appraisals